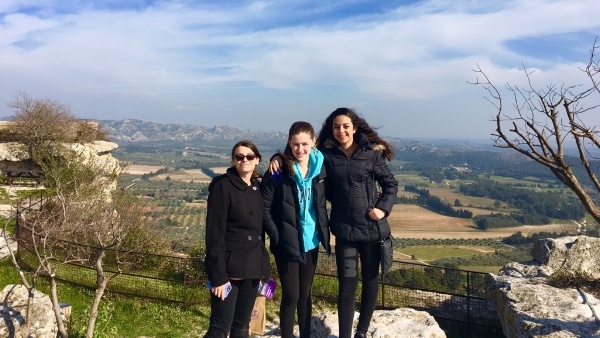 That’s a sad truth we all know, and it’s not just public school students who are not learning another language but also private school students who are taught various languages from at least fifth through twelfth grades. Although there are some who are close to bilingual by graduation, it’s certainly not the majority, and despite recent efforts to change the statistics, there are better ways to inspire the shift -- cultural exchange programs that begin in middle school.

Just speak to any of the seven Shorecrest middle school students who stayed with French students in two cities in France -- Lyon and Marseille -- over eight days in March. They will tell you that learning to speak French fluently is a life goal now, not just something they do four hours a week in French class.

“This solidified that I want to continue learning French,” says Tia E., one of the four eighth grade students who went on the trip.

Meira K., another eighth grader who participated in the trip also commented, “I definitely do want to go to France in a couple years and do this again just to see how much better my French has become over the past years. I definitely want to stick with French in school because not only am I interested in it and you can go to France but also it opens you up to a lot of other languages.”

“When I first started considering an exchange program, I thought of a few college friends in France I stayed in contact with. They shared my interest and after checking our grade level matched (they now teach English in France), we started the exchange with letters, followed by a box of treats and traditional objects from our areas. Then we added different media like pictures and videos and by the third year, I started to organize the trip. It really helped that the two teachers from France are good friends of mine. I cannot take all the credit for the trip. It could never have happened without their help and organization,” says Agier.

What began as a traditional letter and candy exchange between the students in both cities, evolved this year into a full exchange program where seven of the Shorecrest students and two Shorecrest teachers visited the pen pal families and schools in both cities. They didn’t stay in hotels but with the families of the pen pal children and with the teachers and families, immersed in the beautiful French language, food and culture both day and night.

“I always thought that a pen pal exchange was essential to a world language class. It’s the real-life connection to the world they are learning about,” says Agier.

Even though a visit to most European cities would be amazing, this experience was beyond expectations -- enriching in a way that has inspired a love of learning the French language that classes or traditional vacations just can’t do.

So what’s the difference? Living with the wonderful and hospitable people. While visiting the cities, students who had known of each other before became good friends while learning each other’s languages and visiting amazing historic sites. The combination was unsurpassable.

“It was really a good experience. I have never been to another continent and it was a really interesting experience. I made a lot of really good friends that I’m still in contact with. It really helped me with my language skills. I learned a lot of really essential French words that I use in class now, and I also got to see a completely different culture,” says Ryan H.

Each day students would go to school and classes with their pen pals while every afternoon was spent on wonderful excursions, such as ancient ruins, castles built during the middle ages, and an aqueduct built in the first century. The pen pals would often accompany the students on the excursions, speaking, laughing, and even singing with each other. At night, they would experience traditional French cuisine and observe daily traditions, such as eating only sweets for breakfast or having appetizers before dinner that surpass any decent American dinner.

“Staying at other people’s houses might have seemed scary, but it’s really not like that. By the end of the trip, you feel like you’re best friends,” says Tia E. She went on to say that the trip offered so much more culture as opposed to being touristy, which she enjoyed.

Upon their return, the Shorecrest students are leaders in their French classes now, eager to show off what they know and to soak up more. One student is already planning a visit to France this summer and all three of the seventh graders have said they want to go on the trip again next year. Many of them are still connecting with their pen pal families, Skyping, texting and emailing.

If we want students to become more than an American stereotype or joke, we teachers need to do more for them like Monsieur Agier has done for his French students and give them opportunities like the French exchange program. At Shorecrest, plans are in the works for another visit next year with even more students, and there is also a trip planned to Cuba for Spanish students. Expanding and investing in these trips is not just taking students to see amazing architecture but actually shifting their minds about learning languages.

“Being in France and hearing and learning the language even further has made me want to learn it and be able to speak it fluently even more because I think it’s so beautiful, and I really want to learn another language and be bilingual,” says Erin W.

The pen pal exchange program and cultural immersion trips are just a few of the things that make the Middle School experience at Shorecrest special. We invite you to learn more about the 5th-8th grade Tampa Bay Middle School.