This past summer I read a thought-provoking article by Paul Barnwell in The Atlantic titled, “Students’ Broken Moral Compasses: The pressures of national academic standards have pushed character education out of the classroom.”  While Barnwell’s primary targets are public schools, where standardized testing and the Common Core have created less room for educating the whole child, there are still important takeaways for independent schools like Shorecrest.

First, it serves as a healthy reminder that character education has been a key priority for educational theorists and reformers throughout history. At a time when entry into the most selective universities increasingly feels like a game of chance, it is easy to understand the growing obsession with GPAs, Advanced Placement courses, and standardized test prep, particularly in private schools like ours.  We are after all, a school that prepares kids for college (Shorecrest “Preparatory” School), but frankly that doesn’t distinguish us from any other school in the country (show me a school that boldly claims that they don’t prepare their students for college!). There are some that would say to leave the values at home, and focus on the test prep. Yet the teaching of non-cognitive skills and character has always been considered of paramount importance. It was Aristotle who said, “Educating the mind without educating the heart, is not education at all”, and Martin Luther King, Jr. proclaimed, “Intelligence plus character - that is the goal of true education.” Indeed, our Founding Fathers, like Benjamin Franklin and Thomas Jefferson, understood this too, and saw character education in schools as essential to developing citizens who could sustain and develop our young republic. In this era of decreasing political discourse and growing political apathy, it is more important than ever that schools like Shorecrest are emphasizing the teaching of empathy, respect and citizenship.

Teaching values also makes it more likely that we help our students to develop a lifelong love of learning. Students become more actively engaged when what they learn is connected to the great ethical questions of the day.  Barnwell recalls his most memorable educational experiences as those where he and his classmates grappled with “big ideas such as personal responsibility, systemic injustice, and racism.” I have seen this too in my own students. They begin to see themselves as moral agents with the capacity to bring about positive change. This can be both intellectually stimulating and empower them to act.

Some schools and educators have sought to avoid conversations about ethics and character for fear of being accused of imposing moral values on students. This has become even more treacherous territory to navigate as the culture wars in our country have become more heated, and particularly so in an election year, and even more so in this particular election year! But character education does not mean we have debates about gun control or abortion at school, or any other hot topic that divide us. Rather, it is about teaching our children how to have these conversations with respect; how to listen to an opinion that is different than their own; that they should have the courage to to question their own assumptions; to approach their conversations with each other not as gladiators competing in an ancient coliseum but as open-minded, intellectual collaborators, seeking knowledge, truth and understanding. 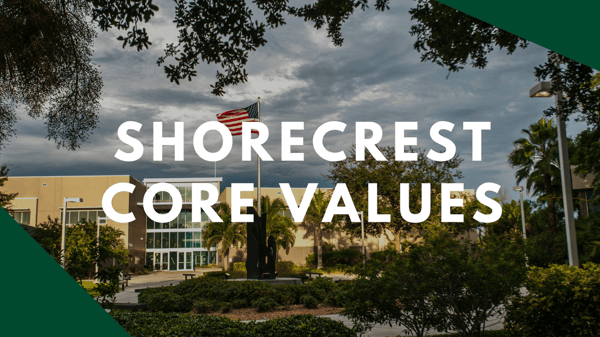 One way that we are reaffirming our own commitment to character education at Shorecrest is by adopting a set of core values:

Our students will see these words more prominently displayed around the school. They will serve as anchors for conversations about what is right and just in advisory conversations. And teachers will actively seek to have our students “grapple with the big ideas” in the classrooms. A history teacher might explore the impact of Abraham Lincoln’s reputation for honesty and fairness, and ask students to reflect on why these were critical to his success as a president. Or a science teacher may ask her students whether or not we have a “moral imperative” to reduce our carbon footprint for future generations.

Paul Barnwell rightly worries that schools will “sacrifice the humanity of students for academic and intellectual gain.” While I would hate to see schools shirk their historic duty to raise responsible citizens and ethical human beings, I also don’t believe it is a simple either/or proposition. Academic improvement and intellectual growth will occur through the teaching of core values, not in their absence.